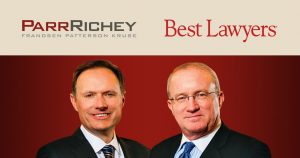 Parr Richey is pleased to announce that attorneys Paul Kruse and Tony Patterson have been named to the 2020 Edition of The Best Lawyers in America for their work in Personal Injury Litigation.

Best Lawyers is the oldest and most respected peer review publication in the legal profession. Best Lawyers uses a transparent peer review methodology to determine leading lawyers in their profession. The process is designed to capture, as accurately as possible, the consensus opinion of leading lawyers about the professional abilities of their colleagues within the same geographical region and legal practice areas. 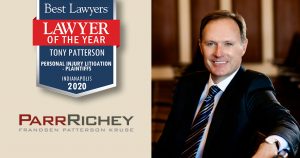 PARR RICHEY FRANDSEN PATTERSON KRUSE LLP is proud to announce that Tony Patterson has been recognized by Best Lawyers as its honoree for personal injury “Lawyer of the Year” in the Indianapolis metropolitan area which spans most of central Indiana including Indianapolis and the surrounding counties. This recognition is given to the lawyer receiving the highest overall peer ranking in his or her particular practice area. Only one lawyer in each practice and metropolitan area is honored with this award.

Best Lawyers is the oldest and most respected peer review publication in the legal profession. In addition to being named “Lawyer of the Year” for 2020, Mr. Patterson has been listed in Best Lawyers for the past twelve years for his work in Plaintiff’s Personal Injury Litigation and he, along with fellow Best Lawyer’s recipient Paul Kruse, were featured on the cover story of the 2018 edition of Indiana’s Best Lawyers. PARR RICHEY FRANDSEN PATTERSON KRUSE LLP has also been listed under Best Law Firms since 2010 with a Tier 1 ranking for its work in representing personal injury victims. The firm represents accident victims throughout Indiana and the Midwest and has two Indiana offices, one in downtown Indianapolis and one in Lebanon, Indiana and can be found at www.parrinjury.com.

Search
Our Other Blog
Recent Entries